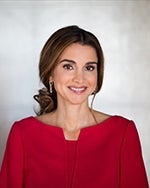 Rania Al Yassin was born on August 31, 1970. She obtained her Bachelor’s degree in Business Administration from the American University of Cairo in 1991. She applied this, first, to a banking career in Jordan and, later, to the information technology sector.

Rania Al Yassin was born on August 31, 1970. She obtained her Bachelor’s degree in Business Administration from the American University of Cairo in 1991. She applied this, first, to a banking career in Jordan and, later, to the information technology sector.

In addition to being a wife and mother, Queen Rania works hard to lift the lives of Jordanians by supporting their endeavours and helping to create new opportunities for them.

Locally, she is committed to breathe new life into the public education system; empower communities and women especially through microfinance initiatives; protect children and families; and drive innovation, technology and entrepreneurship, especially amongst young people.

Internationally, Queen Rania is an advocate for tolerance, compassion and bridge building between people of all cultures and backgrounds. Her efforts to simultaneously challenge stereotypes of Arabs and Muslims, and promote greater understanding and acceptance between people of all faiths and cultures, have won her global recognition.

Her Majesty’s passion is education. She believes that every Jordanian girl and boy, and all children, should have access not only to stimulating classrooms and modern curricula, but inspiring teachers and technology that can connect Jordan’s children to the world and the world to Jordan’s children. Her efforts in the education sector complement the work of the Ministry of Education through initiatives such as the Jordan Education Initiative, the Queen Rania Teachers Academy, Madrasati, Edraak and others. To realize these and so much more, Queen Rania has encouraged private sector partners to drive improvements and strengthen the foundations of Jordan’s education system.

Queen Rania is also a global voice for access to quality education for children around the world. In 2009, Her Majesty championed the 1 Goal campaign for education; she is Honorary Chair of the UN Girl’s Education Initiatives and has advocated access to education in forums and gatherings around the world.
Her work and her efforts to improve the learning opportunities for children have been recognized at the highest levels, nationally, regionally and internationally.

Additionally, through her position on their boards, Her Majesty contributes to the work of the United Nations Fund and the World Economic Forum. She is the Eminent Advocate for UNICEF; and she was part of the UN appointed High Level Panel who advised on the shape and content of the Sustainable Development Goals which aim to improve the lives of millions of people before 2030.

In recognition of her work, Her Majesty has humbly accepted many awards, locally, regionally and globally. These include the Walther Rathenau Award from the Walther Rathenau Institute in Germany for her efforts to greater peace and understanding; the James C. Morgan Global Humanitarian Award from Tech Awards, USA; the Arab Knight of Giving Award from Arab Giving Forum, UAE; the North South Prize by the North South Prize, Portugal; as well as the YouTube Visionary Award.

Her Majesty authored several books primarily for children including the Sandwich Swap, which was inspired by her own childhood experiences.