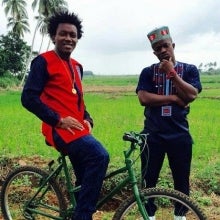 Banlieuz'art is a Guinean music group made up of two members, Konko Malela and King Salaman.

Banlieuz'art is a Guinean music group made up of two members, Konko Malela and King Salaman.

They modernize the local traditional sound making it accessible to new listeners by infusing it with hip hop, reggae, dancehall, and RNB flavors. They have been influenced by classics such as the Bembeya Jazz, Bob Marley, Morgan Heritage, and Fugees, and their music aims to depict the daily realities in Guinea and Africa and to promote inclusive and participative development.

They have a strong following in Guinea and in the region, with millions of views on YouTube. To support the Human Capital Project, they wrote a song, “With her” to bring much-needed attention to the issue in Africa. Guinean Music Group