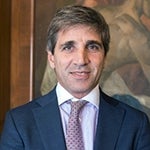 Luis Caputo has a degree in Economics from the University of Buenos Aires and is a professor of Economics and Finance for the graduate program of the Universidad Católica Argentina. He was Secretary of Finance of the Ministry of Finance and Treasury between December 2015 and December 2016. As Secretary of Finance, he played a leading role in negotiating agreements with creditors which were not a part of the sovereign debt restructuring in 2005 and 2010, which allowed the Argentina to definitively exit from default. In that framework, he managed the bond issue launched by Argentina in April 2016 to settle those agreements, following extensive negotiations. In the private sector, he worked for JP Morgan Argentina, where he was head of the Bonds and Stocks Trading area and was in charge of the Latin American Trading area between 1994 and 1998. Later, between 1998 and 2003 he worked in London as Head of Eastern Europe and Latin America Trading for Deutsche Bank, which he chaired in Argentina from 2003 to 2008.