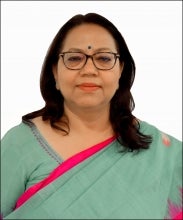 Alka Upadhyaya is an Indian Administrative Service officer since 1990. She has a long association with implementation and policy making of various rural development programs since 2012. Since April 2019 she is Additional Secretary, Ministry of Rural Development, Government of India.

She has worked on the development of rural infrastructure for the past eight years – including the biggest rural road construction and connectivity program known as Pradhan Mantri Gram Sadak Yojana (PMGSY). She is in charge of PMGSY implementation at the national level.  She has been a pioneer in the construction of rural roads using plastic waste in the State of Madhya Pradesh which is now a national practice. She has created combined IT platforms for geospatial planning of rural roads and corroborating pre- and post-construction status using remote sensing technology. In her current role, she also looks after the Rural Livelihood program which is based on a deep engagement with the community and promotes the building of capacity and skills of rural women and youth to catalyze opportunities for rural livelihoods and create an enabling environment for rural entrepreneurship.

Alka Upadhyaya has also held senior positions in the State as Secretary in the Department of Finance, Environment, Personnel, Health and Mission Director in National Rural Livelihood Mission and Water & Sanitation.  Earlier, she held various field postings as District Head coordinating various land issues, social sector programs and law and order issues. She has also worked in a remote Tribal area of Maharashtra as Project Officer of an Integrated Tribal Development Project to handle the acute problems of child malnutrition and high Infant Mortality Rates, and has worked extensively with community to address the problem with a team of motivated Health and Women and Child Development officials.