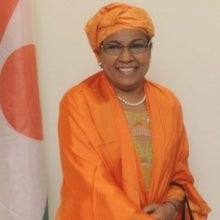 Aïchatou Boulama Kané, Niger’s Minister of Planning since April 2016, is well-known to her fellow citizens as an advocate for the emancipation of women and the promotion of democracy.

Aïchatou Boulama Kané, Niger’s Minister of Planning since April 2016, is well-known to her fellow citizens as an advocate for the emancipation of women and the promotion of democracy.

She is responsible for the design, development, implementation, monitoring, and evaluation of the national planning and foresight policy. It was under her leadership that the 2017-2021 Economic and Social Development Plan (PDES) was formulated. She successfully organized the Round Table for the PDES financing in Paris in December 2017, mobilizing more than $23 billion, and is implementing the PDES roadmap.

Ms. Kané was previously Minister of Foreign Affairs from 2015 to 2016. She was appointed Governor of Niamey in 2011 and served in this position for two years before joining the Prime Minister’s Cabinet as Chief of Staff.

She led an important march protesting the low representation of women in the National Conference, for which May 13 is celebrated as Nigerien Women Day. In 1991, she was elected to the National Sovereign Conference as a member of the Nigerien Party for Democracy and Socialism. She was named Secretary of State for Planning in 1993 and fought for the upwards mobility of African women. In particular, she promoted female empowerment through the development of activities including crafts. Her appointment as Coordinator of the International Exhibition of Crafts for Women (SAFEM) in 2000 illustrated her efforts in women's crafts.

Ms. Kane graduated from the University of Rennes in France with an economics degree in 1979, and later studied at the Pantheon-Sorbonne University, obtaining a diploma of Specialized Studies.